The contest is a unique theater tradition. Every year playwrights from around the US and several foreign countries submit unproduced original one-act plays to the contest. Each script goes through a rigorous screening process in which scripts are read by a panel of volunteer script readers. What makes the contest unique is that the readers represent people from all walks of life in the community. After multiple readings, the top ten scripts from this process are then evaluated by a panel of directors and final judges who select the three prize winners and determine which plays will be produced and staged by local volunteer actors, directors, and technicians.

For a third year, the productions will be at Mindframe Theaters in Dubuque, through a partnership with Mindframe.  Special lighting and stage embellishments and the availability of refreshments have made this a popular and memorable evening of live theatre for Festival patrons.  This year’s plays are provocative, humorous and thoughtful:

Performances of this year’s one act plays will be August 20, 21 and 22 (Thursday, Friday, and Saturday) at 7:30 pm at Mindframe Theaters, behind Kennedy Mall in Dubuque. All three plays are shown each evening.  An opportunity to meet the directors, actors and possibly some playwrights for discussion will follow the performances each night. Tickets are $15.00 at the door, $10 for college students with ID and younger.   More at www.dbqoneacts.org.

Contact information for the winning playwrights and the three directors is available on request. 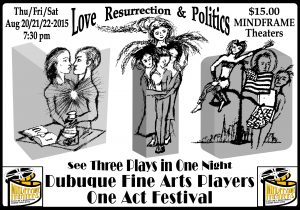